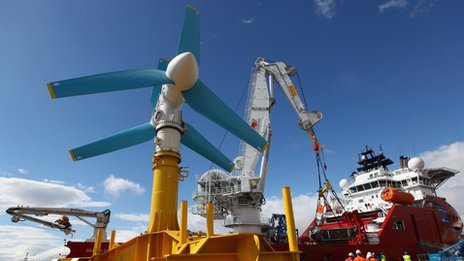 The Pentland Firth is said to have massive potential for tidal energy, but the harsh environment makes harnessing it a difficult challenge

A tidal energy scheme in the Pentland Firth could provide enough power for almost half of Scotland’s electricity needs, according to research.

The firth, which lies between Orkney and the Scottish mainland, has some of the fastest tidal currents in the UK.

Engineers from Edinburgh and Oxford Universities said turbines placed in the stretch of water could generate 1.9GW (gigawatts) of clean energy.

They said this was equivalent to 43% of Scotland’s electricity consumption.

Turbines would need to be located across the entire width of the channel to fully exploit it, the researchers said.

The engineers said their study narrowed down earlier estimates that the firth could produce anywhere between 1GW and 18GW of power.

They calculated as much as 4.2GW could be harnessed, but because tidal turbines are not 100% efficient the estimate of 1.9GW was a more realistic target.

The researchers said this was equivalent to 16,000GWh (gigawatt hours) per year. Figures from the Scottish government state that in 2011 Scotland’s consumption of electricity was 37,000GWh per year.

The study team have outlined locations where turbines should be positioned to boost the area’s energy producing potential.

Sites which minimise the impacts on sea life and shipping have been identified by the UK Crown Estate, which will lease them to tidal energy firms.

Prof Alistair Borthwick, of the school of engineering at the University of Edinburgh, said: “Our research builds on earlier studies by analysing the interactions between turbines and the tides more closely.

“This is a more accurate approach than was used in the early days of tidal stream power assessment, and should be useful in calculating how much power might realistically be recoverable from the Pentland Firth.”

Prof Guy Houlsby, of the Department of Engineering Science at the University of Oxford, who led the study, said: “The UK enjoys potentially some of the best tidal resources worldwide, and if we exploit them wisely they could make an important contribution to our energy supply.

“These studies should move us closer towards the successful exploitation of the tides.”

The results were welcomed by environmental group WWF Scotland.

Its director, Lang Banks, said: “The sooner we can start to deploy devices in the water the greater the chance Scotland will have at becoming a world leader in developing the technologies to turn tidal power into clean, green electricity.

“Marine renewables, such as tidal power, will have a critical role to play in meeting the Scottish government’s commitment to decarbonise our power supply by 2030.

“With careful planning we can harness Scotland’s tidal energy to help cut our climate emissions while safeguarding the nation’s tremendous marine environment.”

In September, energy company MeyGen was given permission to install what was described as the “largest tidal turbine array in Europe” in the Pentland Firth.

The project will be the first commercial deployment of tidal turbines in Scottish waters.

MeyGen said the phased project would initially see an 86MW array deployed, which could generate enough electricity to power the equivalent of 42,000 homes.

The company hopes a second phase would eventually see up to 400 submerged turbines at the site, generating some 398MW.

Scotland has been described as a Saudi Arabia of renewable energy potential, but developing power from offshore tidal streams is fraught with difficulty.